They made it! Yesterday it was a dream, today its a revolutionary airplane that flew 40 000km without fuel, a first for energy!
Bertrand Piccard’s vision, coupled with André Borschberg’s managerial experience and the skills of a multi-disciplinary team have enabled an idea to be transformed into reality. « Too big, too light and impossible to control in flight», said the experts. Nevertheless, industrial partners provided fundings and technologies to realize the most energy efficient airplane ever built.

Two ambassadors for a clean future

Two men, both pioneers, innovators and pilots, are the driving force behind Solar Impulse.

Bertrand Piccard, a medical doctor specialized in psychiatry, explorer and aeronaut, who made the first non-stop round-the-world balloon flight, is the initiator and chairman. André Borschberg, an engineer and graduate in management science, a fighter pilot and a professional airplane and helicopter pilot, is the co-founder and CEO.

The former’s avant-gardist vision and the latter’s entrepreneurial and managerial experience are an ideal combination.

« If governments had the courage to promote clean technologies on a massive scale, our society could simultaneously reduce its dependence on fossil fuels, create jobs and stimulate sustainable growth. »
Bertrand Piccard

« Building teams is both art and science. The value of talent is created through differences, not similarities. »
André Borschberg 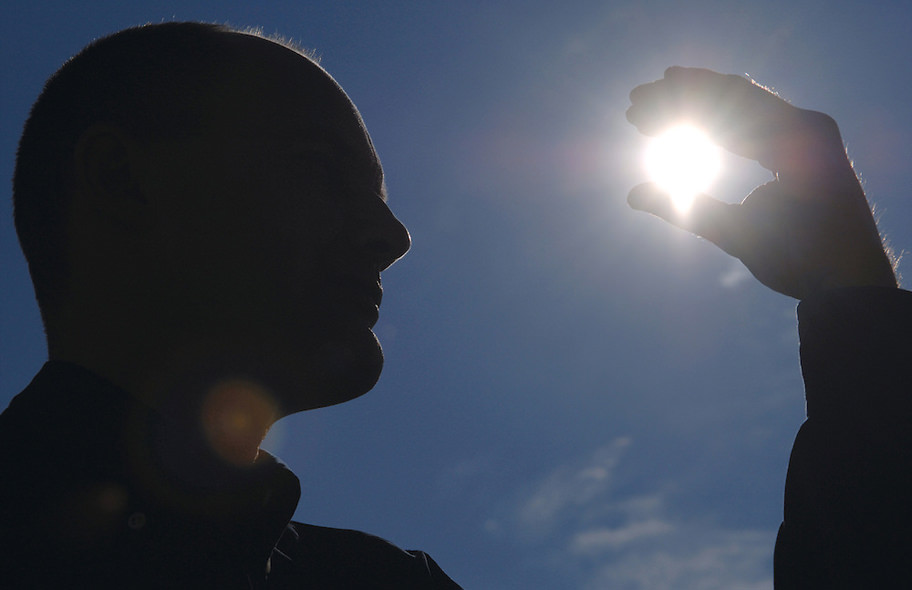 Linking science with adventure to promote clean technologies, he develops the project’s philosophy and outlines its symbolic and political reach.

his managerial experience, passion for aviation and interest in innovative solutions have led him to manage the project and head the technical team.

All determined to achieve the impossible

Job applications flood in, but no-one really appreciates the high achievement level and the demands that are made on team members.

For each of them, trying to build a flying machine for which no benchmark exists, means being confronted constantly with uncertainties and question marks.

Their creativity is matched only by the enthusiasm of their commitment. The Solar Impulse team is about 90 people strong, including 30 engineers, 25 technicians and 22 mission controllers, supported financially and technologically by over a hundred partners and advisers.

Each branch of the team has a key role. The engineers, who make up the “configuration & structure”, “energy and propulsion” and “workshop” teams, built the airplane. Since the beginning of the Round-The-World flight, part of them are following Solar Impulse 2, taking care of maintenance, while the others are based at the Mission Control Center (MCC) in Monaco. Along with the “flight mission” team, composed of meteorologists, mathematicians, air traffic controllers, they prepare and follow the flights, and are in constant communication with the pilot.

The “flight tests” team is in charge of the ground tests and training and maintenance flights, before the beginning of each mission. The goal is to train as much the pilots as the MCC, and make sure that all the plane’s systems are in good shape.

On site, the “ground crew” is responsible of handling the plane in the hangar and on the runway.

The project being as much about engineering as communication, the “marketing & communications” and “multimedia, graphic design & photographies” teams are also important elements of the adventure. Like the engineers, they are split up between Monaco and on site to be able to cover and communicate - with the press, on the website, and on social media - about everything that happens concerning the pilots and the mission.

Let’s not forget about the “project support” and “finances and administration” teams, which take care of us all and keep the Solar Impulse boat afloat.

A shared vision for sustainability

Solar Impulse Partners have in common a pioneering spirit, a long-term vision and a desire to explore new horizons. They share the basic values of the project: exploration, technological innovation, competence, entrepreneurial expertise, passion, teamwork, dream and emotion.

Like Solar Impulse’s initiators, they are keen to use these values to promote renewable energies and the clean technologies needed to protect the environment.

These last years, several eminent personalities have committed themselves to searching for concrete solutions to safeguard the future of our planet. Solar Impulse has invited some of them to join in the adventure.

They have agreed to form a patronage committee as evidence of their support for the project, sharing our adventures, and communicating our message on the importance of clean technologies in the fight against climate change.

The Angels are an integral part of the team, an inner circle of people intimately associated with the project. Permanent free access gives them the exclusive right to take part in each high point of the adventure.

By supporting the Solar Impulse Foundation, they commit to hope-bearing solutions and to the values that the solar aircraft symbolizes.

The Angels Program offers private individuals an opportunity to join in the challenge and experience it from the inside. The Angels are an integral part of the team, an inner circle of people intimately associated with the project. Permanent free access gives them the exclusive right to take part in each high point of the adventure. By supporting the Solar Impulse Foundation, they commit to hope-bearing solutions and to the values that the solar aircraft symbolizes.